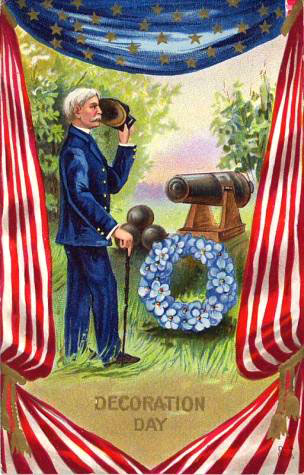 Today we begin a holiday weekend. A holiday can mean different things to different people. In England, the word is used to describe what we in America call a “vacation.” Here at home, a holiday is a special day off from work or school where we may plan a backyard barbeque or family picnic. It is generally a date declared on an official government calendar to commemorate a notable observance.

“Holiday” is derived from the Old English word hāligdæg (hālig “holy” + dæg “day”). Its literal origin was religious. A holiday was a holy day. During the Middle Ages, wealthy people would take off from their normal responsibilities to go on pilgrimages for religious reasons. Peasants, too, refrained from work to observe holy days. Eventually, civil governments began to authorize time off for occasions beyond the religious, applying the same terminology.

The terminology of the holiday we observe this weekend, Memorial Day, also changed over time. This non-religious holiday was initially called Decoration Day. For thousands of years throughout the world, people have decorated the graves of loved ones, soldiers, and the forgotten. Three years following the end of the Civil War, in May 1868, General John A. Logan called for a nationwide day of remembrance for the purpose of strewing with flowers or otherwise decorating the graves of comrades who died in defense of their country during the late rebellion. Decoration Day, as he called it, was held on May 30th because it wasn’t the anniversary of any particular battle. The holiday later transformed into what we now call Memorial Day, observed on the last Monday of every May.

This weekend we also observe another holiday, or rather “Holy Day.” The religious observance is the Day of the Trinity, also known as Trinity Sunday. Please join us for this holiday, on Sunday, May 30th at our 9:15 AM (indoor) or 10:30 AM (outdoor drive-in) liturgies. We will celebrate our Triune God on this Holy Day. We will also prepare our hearts in giving thanks to those we remember on Memorial Day, Monday, May 31st.