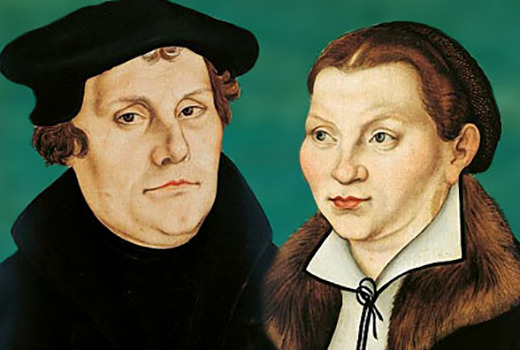 “There is no more lovely, friendly and charming relationship, communion or company than a good marriage.”

These words were spoken by Reformation leader Martin Luther. Obviously, he and his wife Katharina had a strong bond.  Luther, at the age of 42, married Katherina von Bora, 16 years his junior, on June 13, 1525.  Their twenty-one-year marriage was blessed with six children.

Romance, however, did not spark the beginning of their relationship. Katharina, a Benedictine nun, and several fellow members of her convent became interested in the growing reformation movement and were disenchanted with their religious life. Wishing to leave the order, they conspired with one another and decided to reach out to Luther for his assistance. Luther arranged for a friend, who regularly delivered herring to the convent, to help the nuns escape in his covered wagon among the fish barrels, and they fled to Wittenburg where Luther was located.

During the next two years, Luther worked to arrange homes, marriages, or employment for the refugee nuns. Katherine remained unmarried during that period, though she had several suitors.  Luther was reluctant to marry as he thought it may hurt the Reformation but ultimately concluded that “his marriage would please his father, rile the pope, cause the angels to laugh, and the devils to weep.” The outlaw monk decided to marry the runaway nun.

We will be gathering on Martin and Katharina Luther’s wedding anniversary this Sunday, June 13th for worship at our 9:15 AM (indoor) and 10:30 AM (outdoor drive-in) liturgies. We will also be holding the final Sunday School session for this season and recognizing our graduating high school seniors. Additionally, our annual church picnic will be held immediately following the 10:30 AM worship. Please join us for this exciting day!​