Eye of the Needle 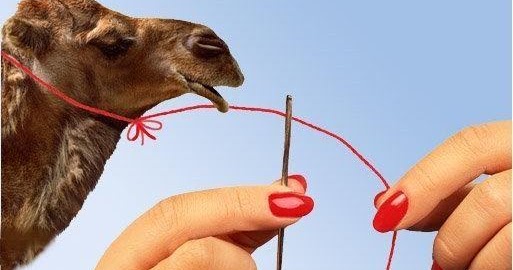 Camels are closely associated with Saudi Arabia. So, it may be no surprise that a faith tradition with its roots in the region would reference camels. Islam’s holy book, the Quran, states, “To those who reject Our signs and treat them with arrogance, no opening will there be of the gates of heaven, nor will they enter the garden, until the camel can pass through the eye of the needle: Such is Our reward for those in sin.”

However, there is some debate regarding the translation of the word referring to the humped animal. Camel in Arabic is “jamal,” which may also be translated as “twisted rope.” Either way, the message is still the same – there is a challenge threading the needle.

Nevertheless, the metaphor of a camel passing through the eye of a needle also has a history in Judaism. For example, it is used several times in the Babylonian Talmud. Additionally, a midrash on the Song of Songs refers, “The Holy One said, open for me a door as big as a needle’s eye and I will open for you a door through which may enter tents and camels?”

Jewish tradition further expands the exaggeration by abandoning the camel in some phrases and replacing it with the enormous elephant. One example from the Talmud: “They do not show a man a palm tree of gold, nor an elephant going through the eye of a needle.”

Christianity sticks with the camel and eye of the needle metaphor. In three Gospels – Matthew, Mark, and Luke – Jesus responds to a young, rich man’s question asking how to inherit eternal life. Our Lord informs him that it is easier for a camel to go through the eye of a needle than enter the kingdom of heaven.

Similar to the translation debate of the Arabic “camel,” some claim the Bible’s early translators incorrectly transcribed a misspelled Greek word. For example, Cyril of Alexander and others contest “kamêlos (camel)” was written in place of “kamilos (rope or cable).”

We will be considering The Gospel of Mark’s version of the camel and needle metaphor during worship on Sunday, October 10th rd. Would you please join us for either the 9:15 or 10:30 AM liturgies and help us thread the needle?