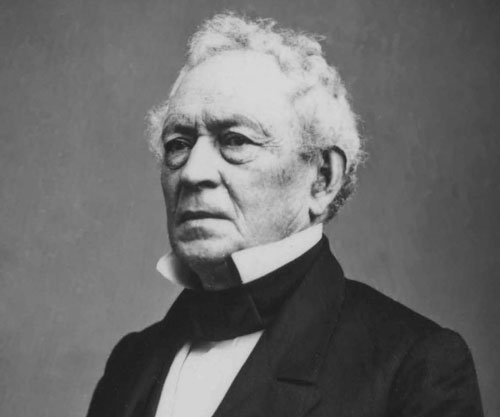 The son of a pastor, Edward Everett, was admitted to Harvard College at the age of 13. He graduated as the school’s Class of 1811 valedictorian four years later. Following graduation, his pastor convinced him to follow in his father’s footsteps into the ministry. Everett then served as the pastor of the Brattle Street Church in Boston, Massachusetts.

During his pastorate, Everett gained a reputation for his skills with the written and spoken word. However, the popular preacher quickly became frustrated with the constraints of the pulpit for his oratory style. As a result, he decided to leave the ministry and return to Harvard for a teaching position, and, ultimately, he became its 16th president. His intelligence and phenomenal oratory skills eventually led him to politics. Everett served as a U.S. Representative, a U.S. Senator, Governor of Massachusetts, Minister to England, and U.S. Secretary of State.

A major proponent of efforts to sustain our Nation’s union during the Civil War, he traveled the country to deliver influential speeches. On November 19, 1863, as America’s most famous orator, he was invited to Pennsylvania to serve as the featured speaker at a memorial event. His address lasted about two hours. His remarks may have deeply moved the crowd, yet they were overshadowed and essentially forgotten. The two-minute follow-up by the next speaker forever outshined his message.

Following the day’s ceremony, Everett remarked to his subsequent speaking partner, “I should be glad if I could flatter myself that I came as near to the central idea of the occasion, in two hours, as you did in two minutes.”  He said that to Abraham Lincoln, who followed his speech with the Gettysburg Address.

Sometimes, shorter is better. Everett, at the time, the most incredible speaker in the country, probably would agree with this conclusion. After all, given his impressive intellect, skills, and accomplishments, most Americans today are unfamiliar with him. We do, however, remember Lincoln’s famous speech and its impact.

This Sunday, November 21, on Christ the King Sunday, Jesus keeps his comments short in the day’s assigned Gospel message, John 18:33-37. In these five verses, Pontius Pilate interrogates our Lord. During this exchange, Jesus only utters 88 words. It is no time to pontificate. We know that Christ is King. Will you join us for worship at either 9:15 AM or 10:30 AM this Sunday to ponder the word, the Word made flesh?